Abrasion Resistant steel is one of our most popular products at Clifton Steel. With 4-5 different options, how do you know which option is best suited for your project? The easiest way is to talk to a Clifton Steel representative, but another option is to learn about what it is and what the differences are. 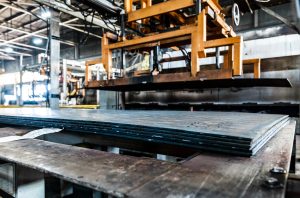 What is AR STEEL plate?

Before we get into the differences between the two most popular abrasion resistant grades, let’s cover quickly what AR plate is. Abrasion-resistant (AR) steel plate is a high-carbon alloy steel. Due to the added alloys, it is formable and weather-resistant, and the addition of carbon makes it harder when heat treated. With these properties, AR steel is ideal for projects where failure of the material comes from wear and tear or abrasions.

What do the numbers mean?

With abrasion resistant steel you’ve probably noticed there is usually a number after the AR, such as AR400, AR450, AR500. You might be wondering, why is it there and what does it mean? The number is referring to the hardness range of the steel. The hardness number is based on the Brinell scale. The Brinell scale measures the size of the indentation left by a steel ball with a specific amount of force behind it. Typically, a 10 mm hardened steel ball is used with a force of 3,000 kgf to create the indentation, and a calibrated scope is used to read the size of the indentation. You’ll see “BHN” (Brinell Hardness Number) when referring to numbers of hardness.

AR500 steel plate is chemically similar to AR400 steel plate, except the hardness range is higher and it has more carbon and manganese than AR400. These elemental differences help the steel achieve a higher surface hardness. To be classified as AR500, the hardness needs to clock in between 477 BHN and 550 BHN. To read more about AR500 steel, click here.

I work at a rock quarry, 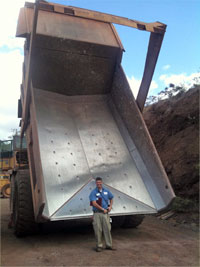 and I’m looking to line different pieces of equipment with abrasion resistant steel plate. I have a fleet of dump trucks, and the bed of the trucks are usually lined with removable bed liners. The beds take a lot of impact when the rocks fall into the bed after being excavated, so I need something that will hold up and will be less likely to shatter from the falling rocks. I’m going to choose AR400 plate for this because AR400 is really good for projects with high impact compared to AR500. Since AR400 plate is softer than AR500 plate, it can withstand more impact without cracking or shattering. 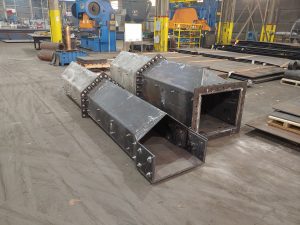 Same quarry, same rocks, new piece of equipment. After we have the rocks in the bed of the truck, they need to go somewhere. The next step is dumping the rocks into a conveyor system to be sorted and then sized in a rock crusher. After the rocks leave the rock crusher, they slide into a chute. I have to update this chute liner, and I’m going to choose

AR500 steel because the rocks are just sliding down instead of being thrown or dropped onto it. AR500 steel can withstand the abrasion that the rocks cause by sliding better than the AR400 steel, meaning it would last longer.

I still have questions

That’s okay! Give us a call, or fill out our quote request form, let us know what kind of project you’re working on, and we can help figure out which steel is the best option for you.